skip to main | skip to sidebar

Boris and Bobby do the Monster Mash!

Bobby 'Boris' Pickett recorded the classic 'Monster Mash' in 1962, then Boris Karloff made the film 'Black Sabbath' in 1963. Opening scenes of this film and the song by Bobby were mixed with my computer and here's the result, 'Boris and Bobby do the Mash!' Enjoy!

Boris and Bobby do the Monster Mash:

Posted by Godzzla at 6:01 PM No comments:

THE REST OF THE SHOW

Just last year blogger Lionellatwill realized he had audio taped the '65 Shindig episode, and gratefully posted the missing minutes, the ones with Boris singing his rendition of the Monster Mash, Ted Cassidy singing 'The Lurch', as well as Jim Doval and the Gauchos, and the Wellingtons singing other unknown Halloween music. All missing for decades, and finally proof that the missing segment even existed. It starts out with an introduction by regular Shindig MC Jimmy O'Neill, then the drums kick in as the Mash begins. Boris sings the MM for a minute, then The Gauchos take over with the tune, "Bellas Bash". Next is Ted Cassidy as Lurch doing the same as a dance and singing skit. After that there's "Skully Gully" by the Wellingtons, and the missing minutes wrap up with the Gauchos again and the rockin' tune "Out of Sight". I took the actual audio from Lionellatwill's audio and added some video clips from the Shindig episode and present this recreated footage of the missing minutes might have acutally looked like:

Back in October of 1965 ABC telecast a Halloween episode of 'Shindig', starring an aged Boris Karloff as the host, and on that episode he sang his version of the classic tune "The Monster Mash", a song that Bobby Boris Pickett had made famous just three years earlier in 1962. Bobby impersonated the classic voice of Boris, and the song has been on the charts about every year since. The episode was recorded on early video tape, and although the show is out there, it is missing five minutes and seven seconds of footage. Either the tape was cut and used for another show, or it simply disintegrated. Unfortunately it's the Boris "Monster Mash" portion, as well as another few minutes of Halloween classics. Two years ago I found the Halloween Shindig episode minus the clip, and took a few scenes of Boris from the show and lip cinched him to the Bobby Boris Pickett version. I inserted a revved up version of the song, painstakingly edited by 'Scar Stuff', as well as some classic Universal movie clips and made a short video. Here's the result:

Posted by Godzzla at 7:06 PM No comments: 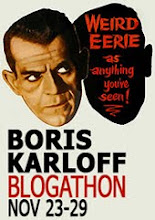 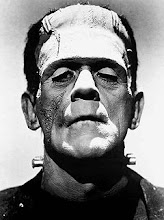